Simpson Reinforcing, Incorporated, a full-service reinforcing steel fabricator, opened for business in September of 1969 in a garage. Originally the business involved drafting and blue print reproduction for the construction industry.

The business grew and prospered and in September 1972 a rebar fabrication shop opened in Penn Hills, a suburb east of Pittsburgh. The first Silverlake fabrication facility was opened and production continued in November 1982.

Continued growth required more work space, and an additional Silverlake fabrication facility was opened in 2001 followed by a third in 2007. As Simpson Reinforcing continued to grow, the fleet of flat bed and tilt bed trucks also increased along with the size of the estimating and detailing departments so that the original founding core beliefs, particularly our strong commitment to customer service, could continue to be met.

In early 2016, Simpson Reinforcing moved into a new fabrication facility in nearby Arnold, PA. This facility provides Simpson Reinforcing with the capacity to handle the region’s largest projects. As we move forward into the future and expand our service operations to meet the needs of the contractors and owners who have come to rely on our quality fabrication, the same core beliefs hold true. Attention to detail, friendship, and customer service is paramount in your and our success. 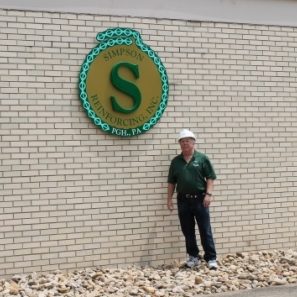 A Welcome Message From Our President

At Simpson Reinforcing, Inc., our employees are ready to handle the diverse needs facing each of our customers. From estimating a competitive price, to detailing a field placing drawing, to fabricating the rebar specified, to on-time deliveries–each step is carefully choreographed to meet the high-standards expected by our customers.

Our experience in all facets of fabrication and singular attention to detail raise the bar for our industry. Focus on our customer sets Simpson Reinforcing apart from our competition.

As Simpson Reinforcing continues to grow, we will stay true to our founding principles of customer service, friendship, and attention to detail.

As President, I am very proud of the skill and dedication of our employees during our 45 years of business. We have the unique ability to provide unequaled knowledge of our products.

Enjoy your visit to our website. Feel free to contact any of our staff if you have any questions or comments.